Life Is A Stage, or Rather, Our Brains Are 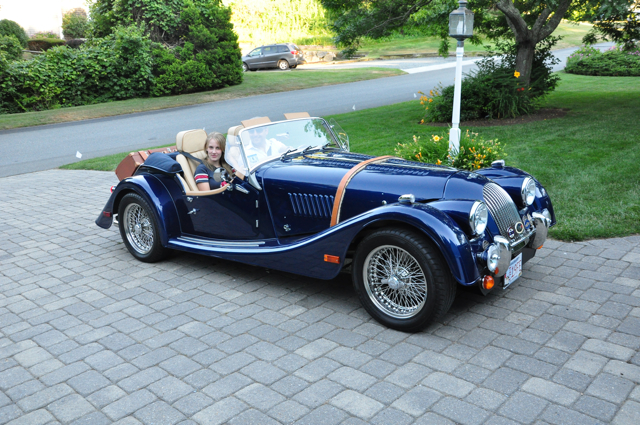 My husband Glenn is a car guy, and one of the apples of his eye is his 2003 Morgan, which lives at our place in Cape Cod.  Our daughter Kirsten and her fiancé Michael, shown in said car, are tying the knot next month here in Canada and we thought it would be fun to have the Morgan come to the wedding, too. So we decided to drive the car back to Canada for a visit.

As you can probably tell from the picture, the Morgan is a very fun car to drive on a sunny day.  Typical of British sports cars, it features a leaky convertible roof, hard seats and a cramped interior.  Morgans have another quirky feature – the body is made of wood — so when it rains, after a while the floor mats get pretty soggy, as does anything that’s resting on them, like your feet.   Unfortunately, nature was not smiling on us during our journey on Monday, as it bucketed rain pretty steadily for the entire 9-hour journey, portending further lack of smiling in our near future.

We got to the border just after midnight, and answered all of the requisite questions.  No, we weren’t bringing back any cigarettes, alcohol or cash in excess of $10,000.  Yes, this thing is a car, and it is registered in Massachusetts, and yes, we are Canadian citizens.   OK – no problem – just take this form over to that building and talk to the people in there and you’ll be all set.  We did as directed, but then things got a little sticky.   The customs official inside that building took a dim view, and didn’t think we were all set. In his mind the car was being imported. Period.  No visiting.  We needed to register it in Canada and pay all of the requisite duties and taxes.  With some satisfaction, he further informed us that Morgans could not be registered in Canada, (a fact of which we were already aware, hence registering the car in Massachussets in the first place) so that option was closed to us in any event.

Customs officials are not possibility-oriented folks. They are rule enforcers, and this last guy in particular was somewhat humour-challenged, so to speak.  No, we could not sign an undertaking to have the car out of the country within a couple of weeks or pay a hefty fine.  No, there was no such thing as an event permit, and he did not know or care what people did for car shows.  This conversation was over.  Get this vehicle out of the country, NOW.  Do Not Pass Go, Do Not Collect $200.

We drove the car, as directed, down the lane reserved for People Turned Back At The Border.  The lane of shame.  It was now 1:30 am and we were both tired, soggy and cold.   A marital moment in the making.

Humans are interesting creatures, and we pride ourselves on our powerful intellect and problem solving skills, except during those times when we “lose it”, and at those times we usually excuse ourselves, although rarely others, on the basis of extenuating circumstances.  This had all the earmarks of one of those times.

The human brain is 3% of our body weight, and the pre-frontal cortex (PFC) is 4% of the brain, so an infinitesimally small part of us governs our problem solving and self-regulatory functions.  As well, the PFC is something of a diva.  It’s extremely fussy. It needs just the right amount of various neurotransmitters, particularly dopamine and adrenaline, to function well.  It has hard-line biological limits, as discovered by Amy Arnsten, professor of neurobiology at Yale Medical School, and her late mentor Patricia Goldman-Rakic.

David Rock, in his book Your Brain At Work, likens the brain to a stage in a small theatre, where thoughts come to our attention like actors vying for a spot on the stage.    The audience is information from our inner world, and they sometimes get up on stage with information from our outer world.

Sitting in the car at 1:30 in the morning, now on the US side of the border, at first required mostly the last kind, inhibition.  Both of us focused hard on not saying “What were you thinking?  Why didn’t you do more research? Whose stupid idea was this, anyway?”  None of those things would have been helpful, although it was incredibly tempting to indulge in a hissy fit.

We then switched to understanding, so we could make a decision.  What to do?  We didn’t relish leaving the car overnight in the outdoor parking lot of a hotel in Niagara Falls, so our focus switched to getting it back to the Cape. We both had meetings and appointments in Canada on Wednesday, so time was of the essence.  We needed to keep only that problem on the stage and figure out the logistics.

Tongues bitten practically in half, we made the decision to drive back immediately, so we then switched into recalling information. Where was the nearest coffee shop, and what had worked in the past to keep us awake during overnight drives? The stage requires a lot of energy, and the power to light the stage is a limited resource.  It’s very easy to get distracted when you’re tired or hungry, and we were both.  Fortunately, automatic tasks like driving require much less energy, as they use a different part of the brain, the basal ganglia, four masses in the older parts of the brain that govern routine.

Lastly, as we set off into the night once more, I engaged in a little memorization, particularly of the features and attitude of the humourless customs official, so I’ll know whom to avoid in future.

We made it back safe, sound and crabby, pulling into our driveway at the Cape around 10:30 am in time to shower, grab a bite to eat, and resume the journey back to Canada in a rental car.  All told we drove, stopping only for fill-ups and bio-breaks, for 27 hours out of 30.  A fun time was had by no one, but at least we didn’t kill each other.  Civilization has a lot to answer for.