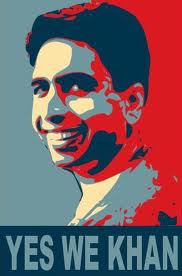 Imagine there’s a heaven…   Where every kid learns at his or her own pace, in accordance with their learning style, with an emphasis on what interests them.

Well, heaven has moved a step closer to reality, as described in this article by Wired Magazine and in this YouTube video. A former (or should I say, reformed?) hedge-fund manager, Salman Khan, has recorded thousands of videos on subjects from calculus to history, and posted them free on YouTube.  Anyone can watch the videos and then work their way through a series of questions to achieve mastery in the subject area of interest.  Truly individually paced learning.

The video describes two fifth and two seventh grade pilot classes in Los Altos, California. Khan demonstrates a dashboard for students and teachers to track progress so they get steady feedback on areas where the student is thriving or where they are stuck.  When they reach a snag, students can seek assistance from the teacher or a peer. The teacher’s time in the classroom is now spent with the students individually – the ultimate teacher/student ratio. One on one time, solving problems. Instead of reducing human interaction, technology is enhancing it.

Around the globe, in the current classroom system, the entire class is required to move at one pace, forcing teachers to lecture to the mushy middle where inevitably some students fall behind and others chafe at the slow pace, resulting in what Khan describes as “Swiss Cheese” gaps in knowledge, setting the stage for cumulative difficulties, particularly in areas like math and science.

Several things struck me about this method, and how it resonates with the latest findings on brain research and positive psychology:

It is inspiring and humbling to see how Salman Khan has developed his own Autonomy, Mastery and Purpose in launching the Khan Academy, a non-profit organization to bring world-class education to anyone, anywhere.   It’s one more example of how we are harnessing the power of the micro-chip to encourage human flourishing.