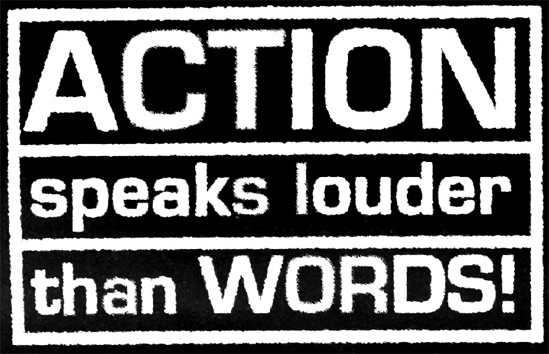 “You can’t talk your way out of a problem you behaved your way into!”

It’s an interesting paradox. We tend to judge ourselves by our intentions and others by their actions. At some level, this makes sense. We can’t read others’ minds, so behavior is a much safer foundation on which to base our conclusions, isn’t it?

It would be, if we used a level mental playing field, but we don’t. Our tendency is to err on the side of inferring ill-intent when judging others, and this is one of the biggest trust busters in building relationships, whether they be friendships, families or corporate culture.

“Natalie didn’t get that report in on time, because she just doesn’t care.”

“Michael didn’t stand up for me in the meeting. He threw me under the bus, to save his own skin.”

Conversely, we are all too willing to excuse our own behavior on the basis of our good intentions, thus preserving our glowing self-image. We enjoy a lovely evening as a guest at a dinner party, and wake the next day determined to express our thanks. A handwritten thank you note would be a nice touch, but I don’t have note cards or stamps at hand. Ok – I’ll send an email – not quite as personal, but better than nothing. Rats, I don’t have their email address. I’ll phone when I get a minute. The next thing we know, a few days have passed, the thank you remains unuttered and the opportunity is lost. Great intentions, lousy follow through.

Further, rarely do we admit to our own poor intentions, or judge our failure to take action as an expression of ill intent. In a burst of enthusiasm and bonhomie we commit to help someone move their belongings from one apartment to another at a future date. As the move date draws nearer, the prospect becomes less attractive and our resolve begins to wane. We begin to look for excuses to get out of the commitment. It’s really not convenient, after all. It’s hot, I have so little free time, and when was the last time Bill helped me? ‘Fess up now. At this point we have no intention of following through, and have mentally prepared a litany of excuses for it. Do we conclude we are lazy? Not by a long shot. Would we judge another in that situation as lazy? You bet.

We see this frequently when coaching clients, particularly within a corporate environment. One of the most difficult things to shift is the client’s reputation within the firm. Long after a behavior has been identified as unproductive, and heroic efforts have been made to change it, their previous poor reputation lingers. People are slow to change their opinions, and like it or not, our colleagues tend to judge us by our actions as seen through the lens of their own inferences as to motivation or intent.

What can we do about this?