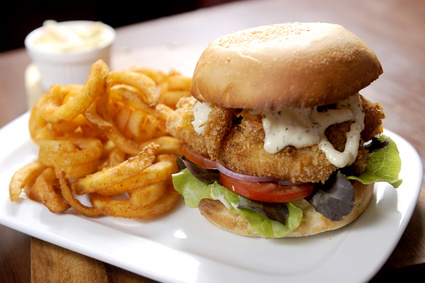 Sarah’s story, as described in  “The end of overeating: Taking Control Of The Insatiable American Appetite” is just one of many.  Author David A Kessler, MD, former commissioner of the US Food & Drug Administration, describes “conditioned hypereating”, which works the same way as compulsive gambling and substance abuse.

Addicted to food?  That’s ridiculous, right?  Not so fast…

The telltale sign is the inability to stop eating while remaining unsatisfied.  Different foods set off different people (Oreos, potato chips or M & Ms, anyone?) but the common element is an optimal combination of sugar, fat & salt, a combination deliberately engineered to hit our “bliss point”.  Called hyperpalatable foods, chronic exposure to them changes our brains, conditioning us to seek continued stimulation, driving us back for more and more, all the while competing with our conscious capacity to say “no”.

Hmmm.  We’ve all been there at one point or another, in my case when exposed to an open tin of Poppycock.  Can’t have the stuff in the house. In my husband’s case it’s mixed nuts.  Normally a quite restrained eater, he’ll inhale the entire tin in one evening.

Ok – we have a solution then. Just avoid the stuff and get on with it.

If only it were that simple.  Unlike other addictions of choice – alcohol, gambling, drugs – we can’t swear off food entirely.  In fact, by one estimate we make 200 food decisions a day (where, when, how much, with whom, will I/won’t I?).  And in North America, particularly, apparently we’re making a lot of poor choices.

We’ve all heard unendingly about the “obesity epidemic”, which I was surprised to hear only started in the 1980s.  Prior to that, our weight was remarkably stable over time.  What changed?  The common answer is women went out to work and stopped preparing meals at home.  While that may be part of the answer, it’s not all of it.  Yes, we eat a lot more prepared food than we used to, but we’ve developed a few more insidious habits, too.

Well what about the feedback mechanism we have to tell us when we’re full?  Can’t we just rely on that?  For foods that are close to what one finds in nature, largely the answer is yes.  But for hyperpalatable foods, for a lot of us, sadly no.

To understand the brain mechanism behind this, we turn to the oystercatcher, a shorebird that was the subject of a study in the 1950s by Dutch ethologist Nikolaas Timbergen. These birds were offered the choice of sitting on their own nests, containing their own small eggs, or sitting on the giant egg of a much larger bird.  They chose the much larger egg – one that was impossible for them to have produced themselves.   Experiments with herring gulls and graylag geese produced the same results.  “Supernormal stimuli” is the name for the giant egg, and from some perspectives, it makes sense.  Smaller eggs are prone to be not viable, so evolution has pointed us towards choosing bigger & flashier. This not only explains our predilection for breast implants, it uncovers why we are attracted to energy dense, engineered food – food that does not occur in nature.

We can wait for the world to change back to when eating was simple and easy, or we can work with what we’ve got here and now.  Even though “big food” may be stacking the odds against us, it’s up to us to make our own choices. Knowledge is power. Let’s use it.