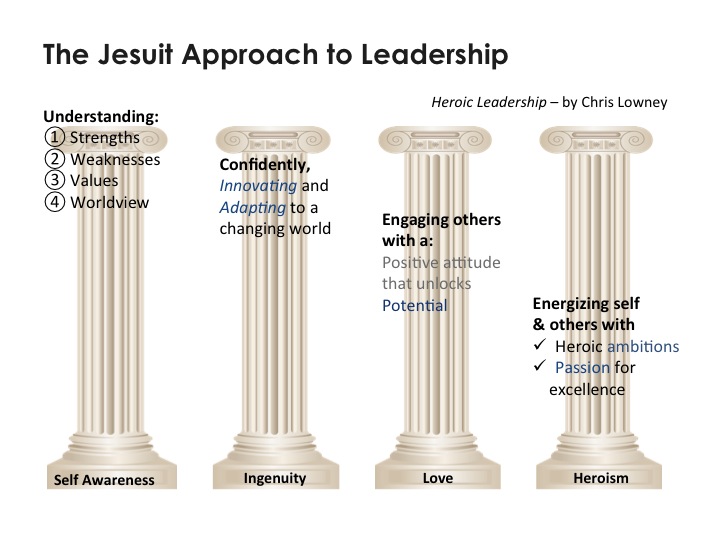 “Leadership is the art of getting someone else to do something you want done because he wants to do it.”

Chris Lowney, a Jesuit seminarian turned investment banker with JP Morgan, provides a fascinating perspective on this subject in “Heroic Leadership”, in which he describes the four pillars of the Jesuit leadership principles, as astonishingly applicable in today’s secular world as they were to the founders of the 450+ year old religious order started by Ignatius of Loyola – a company that literally changed the world through its network of Jesuit high schools & colleges.

The model has both simplicity and power, and significantly, its tenets of leadership embraced by seminarians and educators mirrors emerging empirical research.

The foundation is Self-Awareness.  Who am I?  What do I stand for?  What are my values?  And at my core, what are my strengths & weaknesses?  Historically, Jesuits engage in a 30-day intensive process of self examination and continue with a lifetime practice of very brief, thrice-daily self-examination (the examen) in which each person gauges how they are doing in capitalizing on strengths, improving weaknesses and measuring progress against principles and goals.

Fascinatingly, this process of daily examination is known as reflection on the run.  The Jesuit strategic values include speed, mobility, responsiveness and flexibility. They’re adventurous while remaining committed to core beliefs, engaging in contemplation and a quick return to action.

Immersion in real life, rather than living cloistered and apart, is tied to the second pillar, Ingenuity, in which one confidently innovates and adapts to embrace a changing world.   By cultivating “indifference” to the outcome, similar to the concept of non-attachment in the Buddhist faith, leaders remain flexible to changing priorities.  Loyola described the ideal Jesuit as “living with one foot raised” – always ready to respond to emerging opportunities.

The third pillar of Love is one the author readily admits he hesitated to mention in the cut and thrust environment of JP Morgan. What it means, however, is seeing value in others, engaging them with a positive, loving attitude.   Echoed in the strengths focus endorsed by both the Gallup organization and the Positive Psychology movement, it runs counter to Theory “X” identified by Douglas McGregor, in which people are thought to be essentially lazy, and therefore need to be motivated and controlled.  Instead, Love exhorts us to behave as though each of us is self-motivated and thus needs to be guided towards challenges, as supported by Dan Pink’s work in “Drive” in which he concludes that engaged employees require Autonomy, Mastery and Purpose.

The final pillar is energizing oneself and others by Heroic Ambitions – seeking to shape the future with bold action.

Well, that’s all very well.  I’d be fine if everyone else would jump on the bandwagon, but what am I supposed to do in the face of apathetic, self-involved co-workers and subordinates?

Many years ago, I received a wonderful guideline for correct action from my daughter Lauren’s first grade teacher, who had just admonished another parent for helping herself to the jelly-bean jar on the teacher’s desk.

“But it’s just one jelly bean!” the parent protested, to which the teacher replied:

“If everyone did what you did, would the world be a better or worse place?”

In summary, leadership starts with self; it’s a personal choice.  Lead by example.  Be authentic.  Be ruthlessly frank with yourself about your strengths, weaknesses and the gaps between your intended and your actual behaviour.  And stay open to wisdom from the most surprising sources, including a 450+ year old religious order.